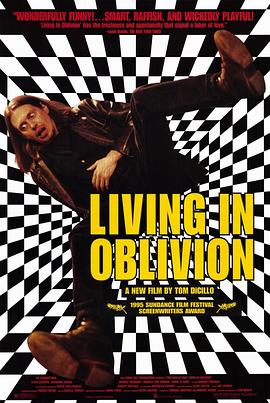 A comic celebration of dreamers and their dreams, LIVING IN OBLIVION is the second film written and directed by Tom DiCillo. With a tone that teeters somewhere between Kafka and the Marx Brothers, it chronicles the hilarious misadventures of a group of people who have joined together to accomplish one of the most difficult goals imaginable - the making of a low-budget independent film. With an innovative and surprising structure that shifts fluidly between the movie being made and those making it, the film offers a rare and accurate -- if comically heightened -- look behind-the-scenes, with the people who make the scenes. How they make them -- and the fact that they manage to make them at all -- is what LIVING IN OBLIVION is all about.Starring Steve Buscemi as director Nick Reve, LIVING IN OBLIVION highlights a day on the set of Nicks film where everything that could possibly go wrong, actually does. Struggling against ever-escalating odds to maintain his integrity and his sanity, Nick is both helped and hindered by his bumbling, if well-intentioned crew, headed by his cinematographer Wolf (Dermot Mulroney), a cameraman whose leather gear suggests that he is more inspired by Billy Idol than Sven Nykvist; a leading lady, Nicole (Catherine Keener), a talented but neurotic actress who is involved in a romance and a rivalry with her leading man, Chad Palomino (James Le Gros); an iron-willed assistant director, Wanda (Danielle Von Zerneck); and, for the first time ever on-screen, a Gaffer.